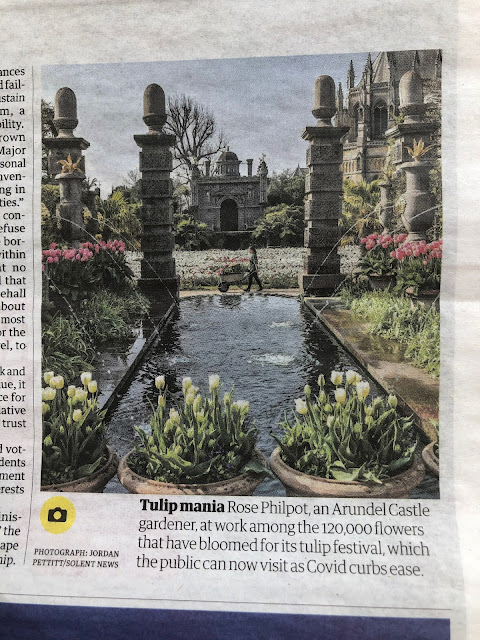 We were there on Friday. If I'd known she was there, I'd have asked to shake her by the hand. In a Covid-compliant manner, of course.

Posted by Michael Shade at 11:28 No comments:

The Revd Michael Vickers, who appeared on the Today Programme the other week, is vicar of two churches; that could well be why he has a plural surname. However it doesn't explain why he's not wearing a dog-collar; or two, even.

He's out-vicared by the Rt Rev Michael Edwin Vickers, who looked after many more than two congregations - he was Bishop of Colchester from 1988 to 1994.

And yet another Rev Michael Vickers is the Club Missionary for the Pot Bellied Pigs RFC, the club that puts the "Pink" back into Rugby.

As you can see, I googled for 'Rev Michael Vickers' - God knows what aptronymic glories await us under other first names.
Posted by Michael Shade at 14:42 No comments:

When the name fits the job

Gloves on the BBC! A Today Programme item from a few weeks back (scroll down the page for the audio clip), with John Hoyland, the New Scientist journalist and Nominative Determinism researcher (sorry, can't find a link to the web page he mentions), along with prime examples Frances Crook and Michael Vickers. And plenty more tasty aptronyms, some of which will doubtless find their way here.
Posted by Michael Shade at 14:14 No comments:

Mother of the Bride and Groom, Occasion Wear, Millinery.

Nigel Rayment is in the rag trade. He's a raiment merchant - he sells raiments of all types and for all occasions. And for all shapes and sizes: Sizes 8-28 with a vast range of plus sizes.
Posted by Michael Shade at 13:27 No comments:

Ye shall not round the corners of your heads

"Twelve members of a breakaway Amish group have pleaded not guilty to charges of beard- and hair-cutting attacks within their community.

They are accused over five incidents in which the beards and hair of Amish men and women were cut, an act particularly offensive in Amish culture.

It is alleged that an internal religious dispute involving a group led by Samuel Mullet motivated the attacks."

And here's what a normal, non-sectarian, mullet is, and what it looks like.
Posted by Michael Shade at 10:44 No comments:

It all Stacks up

Bob Stack was Head of Human Resources at former UK chocolate company Cadbury. In 2008 he was paid a salary of £1.8m - that's one million eight hundred thousand pounds - for one year's work.

To this he added £2m from taking up share options when he retired at the end of the year.

It all Stacks up, doesn't it?

And what does a Head of Human Resources do, exactly, apart from sack people? Anyone sacked by Stack, and now qualifying for a State Pension, will be getting £5311.80. Per year.

Didn't Cadbury use to be a Quaker company? With principles??

And if you're wondering how he's getting on now he's retired, Bob Stack is now making good use of his expertise and experience in negotiating salary packages - he's Chairman of the Remuneration Committee at both Sainsbury's and IMI.
Posted by Michael Shade at 16:21 No comments:

Salt of the Earth

Gardener Bob Salt tends to the grounds of Newstead Abbey, in Nottinghamshire. Salt of the Earth, that man (Matthew 5:13). Or, in even older English, 'salt of the erthe' (Chaucer, Summoner's Tale, line 2196).

See the glorious original Eyewitness photo in the Guardian.
Posted by Michael Shade at 22:52 No comments:

The Bishop that thinks he's a Cathedral

Roger is all sopping

Roger Allsop is the oldest person to swim across the English Channel. He's 70 - even older than me.

On 31 August he swam across in 17 hours 51 minutes. At its narrowest, between Dover and Cap Gris Nez near Calais, the Channel is 34km (21 miles) wide, but looking at the zigzag route he took he must have covered twice that distance. As you can see from the videoclip, when he came out he was all sopping.

Posted by Michael Shade at 18:40 No comments:

Clare Bridge, Cambridge, was designed, and possibly built, by Thomas Grumbold around 1640. One of the stone balls on the bridge parapet has a segment missing. It is said Grumbold vowed he would never finish the bridge until he was paid. He never was. Though they did pay him three shillings for a drawing of it.


When asked "How's things?", he of course replied "Well, I got three bob for the drawing. Mustn't grumble".

Thomas Grumbold did not do this drawing, though.

Posted by Michael Shade at 10:30 No comments:

What is a Glove?

A Glove is an aptronym: a name that is especially suited to the profession of its owner. We call them Gloves because, well, it just seems to fit.

Suggestions for more Gloves are welcome. Please email with details if you spot anything you think could be added to our collection.

Here's a selection of aptronymic contributions from Wordsmith.org (and more in later newsletters).

What's in a name? from Times Online

Nominative Determinism cuttings from The Guardian